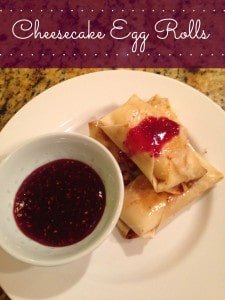 Have you ever had fried cheesecake? I love getting it for dessert after sushi. Cheesecake, dipped in tempura and fried. Sounds perfect! I’ve been meaning to try it at home, but when I came across this recipe for Cheesecake Egg Rolls, I wanted to give them a try since they seemed like an easier alternative.

I had been planning to make them for my boyfriend on Valentine’s Day but he surprised me with Gigi’s Cupcakes! If you are lucky enough to have one near you, their Salted Caramel Cupcake is out of this world! Since I had already bought the ingredients, I was able to make these cheesecake egg rolls another day.

You can serve them with whatever kind of sauce you like (or even eat them plain!) but this raspberry sauce is easy and delicious! All I did was warm up some raspberry preserves in a skillet while the egg rolls were cooking. Let me know if you try another type of sauce!

1. Preheat oven to 425. Using a mixer, combine the cream cheese, sugar and vanilla.
2. Spray a baking sheet with non-stick spray.
3. Have a cup of water handy to seal the egg roll wrappers.
4. Fill each egg roll wrapper with about 2 tbsp of cream cheese mixture and fold according to the directions on the package. Make sure to fold tightly and seal them really well.
5. Place the egg rolls on the baking sheet and spray with non-stick spray. Sprinkle with 1/4 cup sugar.
6. Bake for 8-10 minutes, flipping once.
7. In a small saucepan, heat the raspberry preserves on medium heat and use as a dipping sauce.