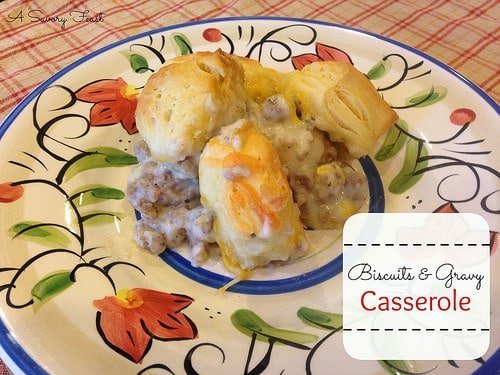 If you have been here before, you know that I love breakfast foods! Biscuits and Gravy is a dish I was introduced to a couple years ago and I love it! I’ve never tried making it before, but we had a really good version at a cafe I used to work at.

Andrew and I needed to make a dish for our church’s breakfast fellowship, so we decided to try making Biscuits and Gravy in casserole-form to make it easier to transport and serve. It was definitely a hit! 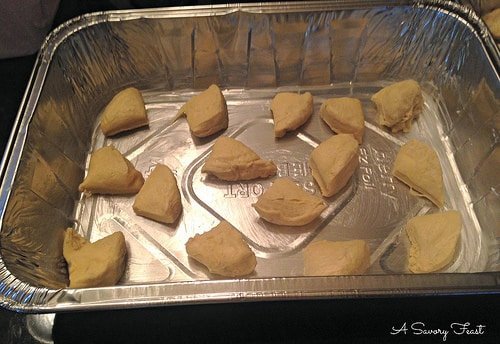 You don’t have to completely cover the pan with biscuits for each layer, but spread them out as shown. When you do the second layer, try to place the biscuits in the empty spaces between the biscuits of the first layer.

By cooking the first layer of biscuits for 10 minutes before adding the gravy, they don’t soak up too much gravy and become soggy. They do take on a little more flavor than your typical biscuits and gravy where you just pour gravy over biscuits. 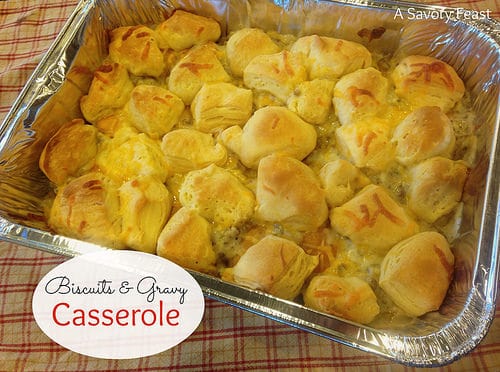 1. Preheat oven to 400. Grease a 9×13 inch pan.
2. Open the biscuits and cut each biscuit into quarters.
3. Layer about 1/2 of the biscuit quarters on the bottom of the pan. Bake for 10 minutes.
4. Meanwhile, brown the sausage in a large skillet on high until fully cooked.
5. Sprinkle the flour over the sausage and use a wooden spoon to stir until the flour is completely absorbed. Lower heat to medium and cook for 2-3 minutes.
6. Add the milk, salt and pepper. Stir to combine.
7. Bring to a boil. The gravy should thicken slightly, but you still want it to be a little runny.
8. Pour the gravy over the baked biscuits. Layer the remaining biscuits on top. Sprinkle with cheese.
9. Bake for 25 minutes or until golden brown.